Wow.  Things are crazy.  Little things, old things, and things that have been brewing for a long long time. 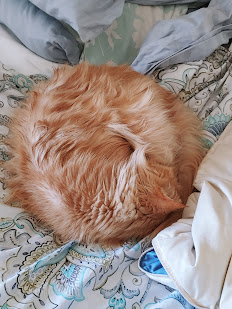 Rusty is probably 20.  His kidney disease hit at stage 4, he's had heart disease for 4 years, and intestinal cancer for 2 years and he occasionally has a really bad day.  Most of the time he's fine, but sometimes he just loses it.  Always fun finding little piles of poop across your room. And piss.  And barf.  The last week has been horrible: other than his incontinence, he's been sitting in the middle of the room an howling like he is lost and no one loves him.  So, Saturday, he went to go back to his first Mom Margaret in heaven.  I've been crying all day.

New Knee.  Scheduled for June 21. Finally. I'm not really ready.  I'm trying to get all the parts sorted out, but I'm dealing with 3 medical providers and 1 insurance company and I can't get a straight answer from anyone.  It's Saturday, surgery is Tuesday, and I don't know where I'm going after surgery or if the insurance will cover any of it.  The stress is not helping.
I tried to get an appointment for the EKG.  I tried to schedule online.  It said Call.  I called.  The recorded message said that I had to schedule online.  Uh??  So I just went and stood at for 15 minutes at the lab while they took everyone in the "has an appointment".  When they finally got to me, they said I could have scheduled.  I explained that NO I COULDN'T.  I left 4 messages over 4 days, and still NO ONE HAD CALLED ME BACK.  And, I it really hurt standing for 15 minutes.  I still had to wait another 20 minutes to get seen, but at least I was sitting.

Music: found out when I installed Barry's radio that he has an old iPod, absolutely full of music off of CD's.  And, he has all the CD's.  So, I'm feeding them into the Mac 1 by 1 with covers.  I had to buy a new TimeMachine backup drive.  His 10 year old iPod still works perfectly.

Google has finally dropped the other shoe, and is getting revenge on Apple for the "less secure app" and "app specific passwords".  Unlike Apple, they have crippled POP access for gmail.  Zilch.  Zip.  Not Happening.
Option 1: go for 2 factor, face up to IMAP.  Problem: the work computers don't have a 2nd device.  Google does have a nice option to produce 10 codes so you can log in without the 2nd device, but it's annoying having the office phone ring every time someone logs into google.  And they don't say what happens after you use all 20 "permanent" codes.  And, 16 character RA# Passwords.  And, IMAP - so if you do have 2 devices you have a problem. The new IOS mail program does NOT have the option to leave email on server for IMAP.  oops.
Option 2: used this on my work computer: since it has an Apple ID, I created a new iCloud email for the AID.  Then I got that installed on the computer.  Then I just forwarded my gmail to iCloud.  I had already moved all the shared Google calendars to iCloud calendars, now that most of the work computers have iCloud.
Option 3: used this on the 4x4 Club computer: old Win10 running Office 365. Strangely, the SMTP still worked.  Theoretically, the IMAP would work.  Not going there.  But, POP stopped working.   So, forwarded the 2 gmail addresses to the Comcast email address.  Then used rules to move them to the correct inbox.
Option 4: used on my Mac.  Since I have unlimited email addresses on my domain, I created Gmail@my domain, and forward my gmail to the new address.
So, I mostly avoided the whole issue by forwarding my gmail to more useful email addresses.